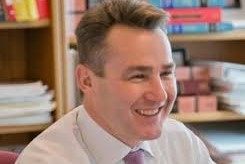 LOS ANGELES – In a taped deposition filmed in September of 2018, a top company spokesman for Johnson & Johnson flatly denied the company knew corn starch was safer than talc in a trial to decide if Johnson & Johnson Baby Powder caused a woman’s mesothelioma.

“Do you agree that Johnson & Johnson knew for years that corn starch is safer?” asked Joseph Satterley, the attorney for plaintiff Amy Fong.

“Safer? No, I disagree with that,” said John Hopkins, former quality control officer for the company from 1976 to 2000. "The two are different. Safer implies a gradation of safety which has never been shown."

The trial in Los Angeles Superior Court is being streamed live courtesy of Courtroom View Network.

Fong, 48, a resident of Pasadena, sued Johnson & Johnson and its talc powder supplier Imerys Talc America claiming she developed mesothelioma, a deadly cancer of the lungs, as a result of breathing in asbestos-contaminated baby powder over a long period of time.

Johnson & Johnson attorneys are attempting to demonstrate the woman's mesothelioma could have been contracted from asbestos in fumes inhaled from an incinerator in Hong Kong near where Fong lived during the 1970s.

The case is among the latest of hundreds of lawsuits filed against Johnson & Johnson by women across the country, most alleging the company’s talcum powder products caused them to develop ovarian cancer. Mesothelioma is a much rarer disease with 3,200 cases in the U.S. reported annually.

Johnson & Johnson won two recent court cases, one a retrial in Torrance after a jury had deadlocked in a trial in 2018. A third trial ended in a $40 million plaintiff verdict.

The deposition tape played for the jury on Monday saw Satterley ask Hopkins if the company had a “zero tolerance” policy for asbestos in baby powder.

Talc, a mined mineral, was crushed to be turned into baby powder from mines in Italy, Vermont, Korea and, more recently, China. The baby powder used by Fong during the time she lived in Hong Kong was reportedly sourced from Korea.

“Have you spoken to miners and millers of the talc in Vermont?” Satterley asked.

“I have not,” Hopkins answered.

Hopkins said approving talc powder was not his decision alone, but involved a number of quality-check people at the company.

“Each individual signs off on it (approval),” he explained.

One report stated that no asbestos had been found in samplings after being viewed by a transmission electron microscope (TEM). Other testing techniques included use of X-ray diffraction to analyze a mineral’s crystal structure.

Satterley asked if testing was designed to make sure talc powder was free of chrysotile and tremolite, asbestos-related minerals.

Johnson & Johnson did testing in its own in-house facilities as well as hiring outside materials testing labs, such as the McCrone Group in Illinois.

In the 1970s, a new testing technique called heavy liquid separation was developed in which talc powder is spun in a tube, separating it from heavier materials that then can be observed under a microscope. Critics of the company said it is a more sensitive test that should have been adopted.

Company officials declined to use it, saying it could not spot chrysotile in the powder and was ineffectual.

“There’s no evidence they did,” Hopkins said.

Hopkins agreed that a company official in an inter-office communique in 1969 warned “It’s not inconceivable we could be involved in litigation,” because of concerns about asbestos in the baby powder.

In a second deposition played later in the day, asbestos researcher Alice Blount, who used the heavy liquid separation method, testified that she had found asbestos in samples of Johnson & Johnson Baby Powder.