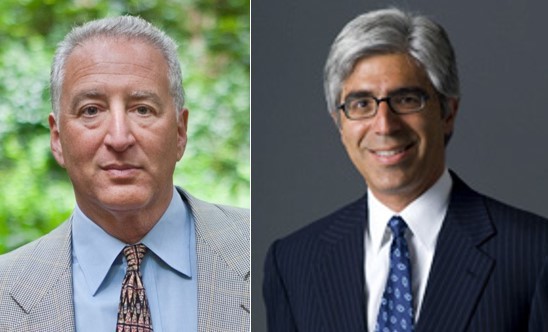 “This case does not go back to the dawn of time,” said Victor Sher, the attorney representing San Mateo County as well as Marin, Santa Cruz County and the city of Imperial Beach. “This case is about 50 years of (oil company) misrepresentation to the world’s detriment.”

However, Theodore Boutrous, an attorney representing the oil companies in the San Mateo lawsuit, described the action filed against the defendants as a sweeping overreaching tort claim unfairly targeting oil companies for all fossil fuel emissions going back to the Industrial Revolution.

Boutrous said the case belongs in a federal court.

“We believe this case is drenched in federal issues,” Boutrous said.

The central issue is who has jurisdiction - federal or state courts – in controversial climate change lawsuits against energy companies like Chevron and Exxon.

Two separate lawsuits against the oil companies were heard back to back on Wednesday before a panel of three judges in the U.S. Court of Appeals for the Ninth Circuit in Pasadena. Both cases are being pursued under public nuisance laws.

One case pits the cities of San Francisco and Oakland versus Chevron, Exxon, BP, ConocoPhillips and Royal Dutch Shell. Those companies won dismissal from a District Court when a judge ruled it wasn't up to the court to regulate greenhouse gas emissions.

Attorneys for the cities of San Francisco and Oakland appealed the judgment.

In County of San Mateo v. Chevron Corp., the oil companies asked the Appeals Court to overturn a District Court ruling remanding back to state court the lawsuits of several climate change plaintiffs.

Sher told the judges the case against the oil companies was not about the defective nature of the product (oil).

“The complaint rests on the (oil company) campaign of misinformation, of deception and denial,” he said. “There is no federal interest in lies and deceit.”

Sher called the campaign used by the oil companies to convince the public fossil fuel emissions were benign as a "multi-faceted” strategy of communications and advertising that attacked known science.

He said the public was misled.

“It is the wrongful conduct that is complained of,” Sher said, adding that the case belongs under the jurisdiction of a state court.

“The grounds for federal (case) removal are extra strong,” he said. “This is a federal case because of its interstate nature. This (carbon emissions) is global. We request the court rule that the only possible jurisdiction is under federal common law.”

An attorney representing San Francisco and Oakland, Michael Rubin, said the state’s claim to jurisdiction goes back to 150-year-old statutes.

“There are no (money) damages in this case,” Rubin said, “only to abate localized harm. This case is similar to lead paint cases for residential housing. It focuses on the wrongful promotion of (oil) companies, their advertising and communication campaign.”

Rubin said oil company executives sought since the 1970s to portray fossil fuel emissions as safe, withholding information to the public to encourage use of fossil fuels. He called it a campaign of “deception.”

“You should remove this case to state law,” Rubin told the judges.

Paul Weiss, representing the oil companies, told the Appeals Court judges they should affirm dismissal of the case.

“All of the defendants' (oil companies) worldwide activities have to be classified as California contacts,” he said. “The plaintiffs cannot prevail.”

Weiss said if the plaintiffs did prevail, numerous companies who had dealings with the oil industry such as airplane manufacturers or car makers could become targets of similar lawsuits.

“Federal law is the body we look to,” he said. “State law can’t. It’s everything around the globe.”

Jonathan Brightbill, deputy assistant attorney with the U.S. Department of Justice, described plaintiff’s tactics - shuffling between state and federal jurisdictions to test outcomes -  appeared to be an act of gamesmanship.

The plaintiffs are represented by the Oakland Office of the City Attorney, the San Francisco Attorney's Office, Altshuler Berzon and Sher Edling, which is handling the case on a contingency fee. The defendants are represented by Paul, Weiss, Rifkind, Wharton & Garrison; Arnold and Porter Kaye Scholer; and others.

Boutrous is with the Los Angeles firm of Gibson Dunn.

A number of climate change lawsuits are currently working their way through the courts with more than a dozen cities and counties suing the oil companies including New York City, Boulder, Colorado, Baltimore, Maryland, the state of Rhode Island and King County in Washington State.

In Oregon last year, a three-member panel of the Ninth Circuit ruled 2-1 to dismiss a case involving 21 young plaintiffs ages 8 to 19 who alleged global warming caused by the oil producers had harmed them physically and degraded their quality of life.

Want to get notified whenever we write about Exxon Mobil ?

Sign-up Next time we write about Exxon Mobil, we'll email you a link to the story. You may edit your settings or unsubscribe at any time.