Nunes not holding back in defamation suit against CNN; More action against challenger and colleague may be on the way, report says 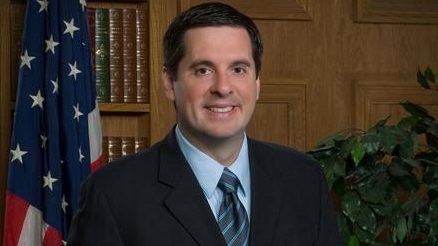 LOS ANGELES – Will conservative California Congressman Devin Nunes have similar success as did a Kentucky teenager in defamation claims against CNN?

Nunes, the ranking member of the House Intelligence Committee, seeks $435,350 in damages against CNN over what he describes as a "demonstrably false hit piece" aired on Nov. 22, 2019, that said Nunes had met with a former Ukrainian prosecutor "to discuss digging up dirt on Joe Biden."

"CNN is the mother of fake news," Nunes opens his complaint filed in December in federal court in Virginia. "It is the least trusted name. CNN is eroding the fabric of America, proselytizing, sowing distrust and disharmony. It must be held accountable."

According to the suit, the story falsely claimed that Nunes was in Vienna in 2018, that he met with Victor Shokin to discuss dirt on Joe Biden and that around the time of the "Vienna trip" (a trip that never happened), Nunes had been communicating with Rudy Giuliani associate Lev Parnas (under indictment for allegedly routing foreign money into U.S. elections).

Nunes says that a segment on Cuomo Prime Time featuring reporter Vicky Ward centered on the headline: "Giuliani associate willing to tell Congress Nunes met with ex-Ukrainian official to get dirt on Biden."

"CNN coordinated publication of the false and defamatory statements about Plaintiff across each of its platforms," the suit claims. "CNN published the CNN Article to multiple new target audiences, including CNN’s 32,000,000+ Facebook followers and CNN’s 56,000,000+ Twitter followers in Virginia and around the World."

The suit includes screen shots of CNN reporting that was re-Tweeted by prominent figures, including Rep. Maxine Waters, a California Democrat, who wrote: "Nunes is an unhinged liar! He knows he met with Shokin in Vienna. This sounds like the midnight visit to the White House to try and prove a lie against Obama. Remember that? Parnas is going to out Nunes. Impeachment proceedings will reveal him and his lies."

Last month, CNN moved to dismiss the lawsuit and to transfer to the Southern District of New York, motions that are pending.

In a memorandum in support of dismissal, CNN claims that it spoke with Parnas's lawyer on the record and that he was quoted extensively in the report. It says that its reporting of what that lawyer, Joseph Bondy, said on the record was truthful and accurate.

CNN claims it made multiple attempts to seek comment from Nunes prior to reporting the story, but that he and staff declined to comment.

"Instead of denying the report before it was published, Rep. Nunes waited until it was published and then filed this suit seeking more than $435 million in damages—labeling CNN 'the mother of fake news” and accusing it of “eroding the fabric of America,'" it says.

Another one of six libel/defamation suits Nunes has filed includes one against Twitter, filed in March 2019, claiming the social media giant squelches conservative viewpoints. It remains pending.

According to the Sacramento Bee, Nunes has suggested more lawsuits may be on the way.

"Nunes has sent at least two letters that implied more lawsuits could be forthcoming — to his 2018 Democratic opponent for his congressional seat, Andrew Janz, and to another California Democratic congressman, Ted Lieu," the newspaper reported on Jan. 30.

And, in the case of Covington (Kentucky) Catholic High School student Nick Sandmann, who sued CNN for falsely portraying him as an aggressor in a confrontation with a Native American elder that went viral on various media platforms, a settlement was announced in early January. The amount was not disclosed, but Sandmann had sought $250 million.

In the meantime, a Los Angeles First Amendment and clinical staff attorney at UC Irvine School of Law dubbed Nunes as the “Libel Bully” of 2019 for his defamation lawsuits.

Susan Seager, a media defense attorney and lecturer at University of California, Irvine School of Law, told The Northern California Record that she came up with the idea after writing a 2016 article about President Donald Trump that she titled “Donald J. Trump is a libel bully but also a libel loser.”

“I wanted to call attention to it because I think it’s an abuse of the legal system to try to chill critics, especially by an elected official," Seager said. "I think it’s outrageous and I think it’s dangerous and I think it’s wrong. I wanted to let people know also that his lawsuits don’t have any merit and that even though he’s trying to cost people legal fees, in the end he’s not going to win.”

Seager said that these sorts of lawsuits are based off of driving up legal fees more than actually winning the case, with plaintiffs taking advantage of certain defendant’s “lack of resources.”