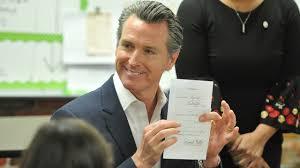 The bill would extend to independent contractors some of the same protections that hourly workers receive, which will present challenges for gig economy businesses such as Uber, Lyft and DoorDash.

“We support the exemptions included in AB 5, but many industries and professions remain unaddressed,” Powell said. “Without a broader fix than that contained in AB 5, we may see a floodgate of costly litigation that drives entrepreneurs out of business and negatively impacts California’s economy, with implications for years to come.”

Uber and Lyft both reportedly told Vox that they would not change their contractors to employees if the bill is signed into law, stating that drivers are not directly tied to their organizations and often work outside the business.

Newsom has stated that he supports the bill and would most likely sign it when it reaches his desk.

In the Dynamex decision, the Supreme Court outlined the requirements for a worker to be considered an independent contractor.

The court found that a worker is presumed to be an employee, and eligible for benefits, unless he or she comes under the so-called ABC rule.

Under the ABC rule, the worker has to be free from control and direction of the hirer; perform work outside the usual course of the hiring entity’s business; and be engaged in an independently established trade or occupation.

The National Federation of Independent Business told the Northern California Record that it intended to fight back against the bill.

"We don’t think it’s right to give a carve out to select industries," Luke Wake, staff attorney with NFIB, told the Northern California Record. "We think that if someone is holding themselves out of being in business and they intend to operate as an independent business, say for example if they’ve gone through the steps of incorporating or having an LLC, if they think they’re an independent business then they should operate under the old standards. So we’re looking for a business-to-business exception from this ABC test."

Want to get notified whenever we write about Civil Justice Association of California ?

Sign-up Next time we write about Civil Justice Association of California, we'll email you a link to the story. You may edit your settings or unsubscribe at any time.