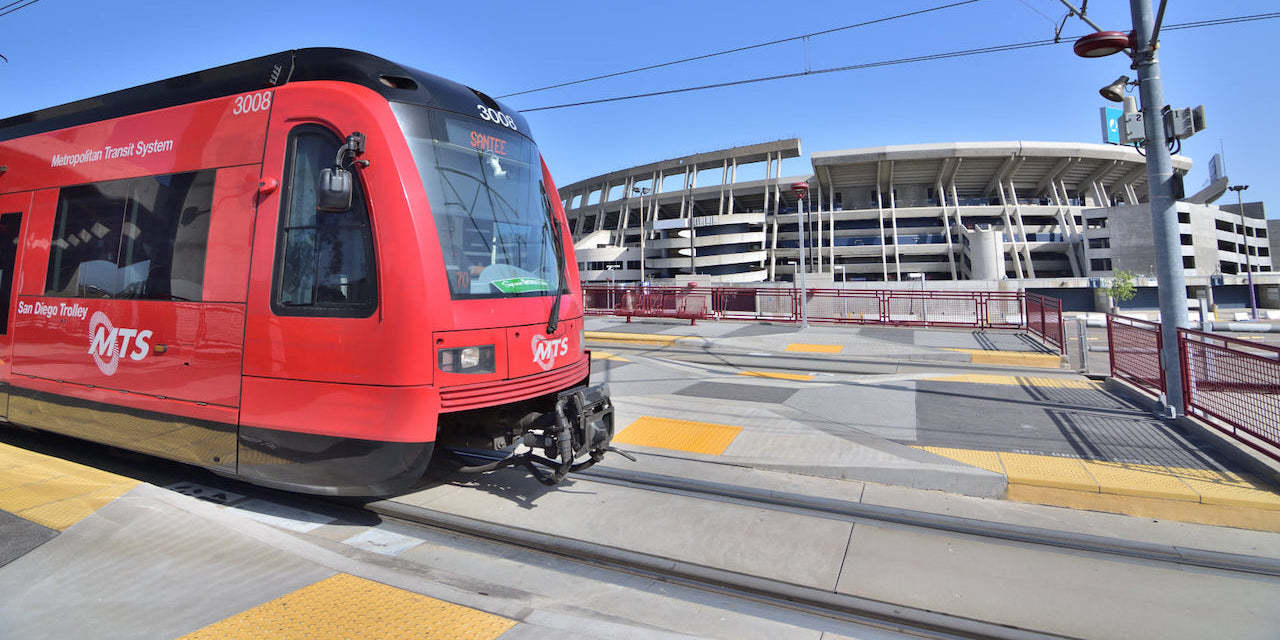 Policy experts and environmentalists alike are speculating what the impacts might be once Mid-Coast Trolley completes its extension of the Blue Line Trolley service from downtown San Diego north to the university community.

Last fall, with a reported goal of capitalizing on the transit expansion, the City of San Diego unanimously passed zoning changes around the proposed Balboa Avenue station. These zoning changes may provide a new growth plan that some supporters say could address housing shortages or support climate action goals.

According to media reports as far-flung as the Chicago Tribune, supporters of the zoning changes include the Climate Action Campaign, the San Diego County Regional Chamber of Commerce and the Building Industry Association of San Diego.

Proponents have described the changes as a way for San Diego to tackle its ongoing housing crisis. The Balboa Avenue plan alone would allow 3,508 housing units to be developed within a half-mile of the station.

Along with housing densification, the new zoning is also written to foster mixed-use projects. With new buildings required to include commercial space, such projects could encourage retail development.

What these changes mean for area businesses or the local economy is debateable.

Baruch Feigenbaum, assistant director of Transportation Policy at Reason Foundation, suggested that the zoning changes accompanying these projects can often be more likely to grow existing businesses rather than stimulate new business development.

“Changes might not attract additional businesses but could encourage existing businesses to move to more strategically advantageous locations,” Feigenbaum said. “There can be benefits when the situations encourage a clustering effect, but the scope of the benefit depends on the conditions on the ground.”

Whether housing density alone fosters a strong business climate is not a given, he added. Other improvements are necessary for increase in economic vibrancy.

“Improvements such as to infrastructure are also needed to create the most attractive business environment,” Feigenbaum said.

Groups opposed to the densification fear changes will bring traffic congestion, environmental degradations and more. Friends of Rose Creek filed suit against the City of San Diego alleging the city failed to comply with the California Environmental Quality Act.

Although the environmental group did not respond to a request for comment, public information supports that the group believes the city should more fully analyze the environmental impacts of the development on Rose Creek, with concerns that development will increase noise pollution and trash in addition to worsening traffic.

Matt Horton, director of the Milken Institute Center for Regional Economics, noted that concerns from local residents or groups about projects included in transit expansion or housing densification can be common through "not in my backyard" backlash.

Horton suggested any city pursuing densification via multi-use projects should strive to create middle housing options not just luxury residences. He said that some developers have indicated that transit-oriented neighborhoods like the one proposed around Balboa Avenue Station could attract Millennials or younger Generation X buyers.

Increased population may not be enough to provide an economic boom for businesses.

“Many forces are playing out in brick-and-mortar shopping as e-commerce continues to increase,” Horton said.

Therefore, the businesses that may do well in a neighborhood around a new trolley station should help residents meet the needs of daily life. Additionally, the businesses must be accessible.

“Those businesses will be best served if the developed neighborhood is walkable,” Horton said.

Such foot traffic, however, has been another concern for environmentalists.

A hearing on the suit filed last fall by Escondido-based DeLano & DeLano, an environmental and land use law firm, on behalf of Friends of Rose Creek is scheduled for March. The litigation alleges that the plan passed by San Diego artificially drew project boundaries. Friends of Rose Creek has referred to the proposed area for the station as a sensitive area and described it as a rare coastal wetland.

Completion of the trolley extension and creation of mixed use projects will also need time to determine how well they address housing needs or stimulate economic development in the area.

Want to get notified whenever we write about San Diego ?

Sign-up Next time we write about San Diego, we'll email you a link to the story. You may edit your settings or unsubscribe at any time.